Pony Wave, a native of Vladimir, Russia, immigrated to the United States with only $600 in her pocket. Filled with determination, focus and trust in the universe, Pony Wave is now one America’s most sought-after tattoo artists. 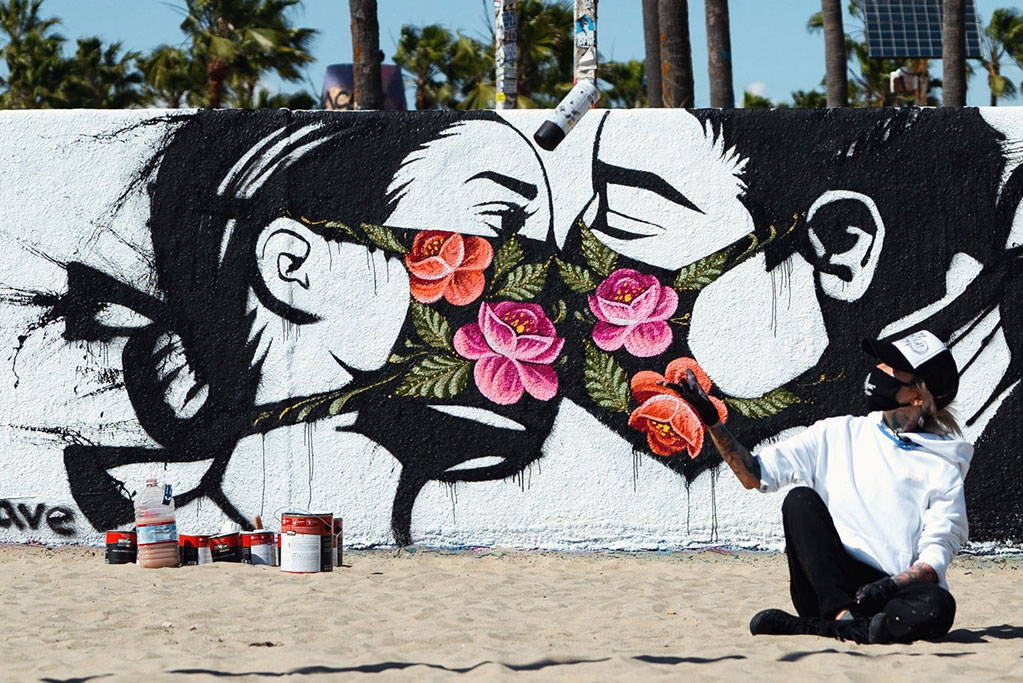 Growing up in Communist Russia, today Pony Wave is running full throttle in the world of social activism, modeling and her latest passion as a recording artist. So what does freedom mean for Pony Wave?

She says, “Freedom is when you are not scared to lose something.”

She expresses her freedom through social activism, fashion and music. Tattoo is just one facet of her life. Her tattoos combine brilliant, vibrant colors with graffiti-style street art.

Pony Wave’s street art, or graffiti art, can best be described as a “thin line between vandalism and beauty” and can often be found on the walls of Venice Beach. The famed Venice Beach art wall is like a social media platform for Pony Wave. On this wall, she can voice not just her opinion or stance but that of the voiceless individuals in the world.

While a rarity to be showcased for an extended period of time, Pony Wave’s graffiti art expression regarding the Covid-19 pandemic remained untouched on the Venice Beach wall for a couple of weeks. (See Pic Above)

The Venice Beach wall is like a social media platform for Pony Wave. On this wall, she can voice not just her opinion or stance but that of the voiceless individuals in the world.

It was a pleasure to feature Pony in this episode of Think Ink Drink and hear her story. Her life was so interesting that we decided to feature her in our separate "Artist Profile" series (showcased below) to get a more in depth look into her personality and beliefs.

We discussed many things, from tattoos to her political stance on the ongoing conflict within Russia and the arrest of Alexei Navalny, an anti-corruption activist & opponent to Vladimir Putin.

Pony Wave is a tattoo godsess, and I am so happy with the Pink Rose tattoo she gave me during our time together. Check it out below, dudes! I time-lapsed it for you guys because I know how precious your time is. You're welcome!

Ok, dudes. I'm off for now. Be sure to check out our all-natural tattoo aftercare products to support our efforts and the good people here at Derm Dude. Our industry-famous tattoo balm is a must- have for every tattoo enthusiast. Trust me, I've tried them all.

Until next time, take it easy, dudes.